0 Greater Poland Diaspora around the world 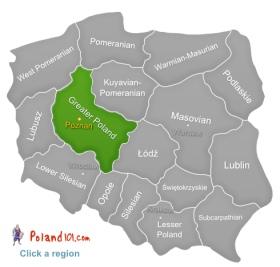 Greater Poland is the region that could be called the birthplace of actual Poland, as this is where various Slavic tribes were united by one single leader over one thousand years ago. Before that point in time, Poland was a lot like other countries: made up of various different regions that were independent from each other.

Today's Greater Poland is the second biggest region in Poland, and quite popular with tourists as a lot of history lies beneath the canopies of the peaceful looking forests, and UFOs might visit every now and then (new circles turn up in the fields of that region every single year). Greater Poland is a region in which kings (and others) were murdered, but it is also a region with beautiful lakes and tranquil rivers.

Getting to and around Greater Poland is fairly easy. Most likely you will start in Poznan (which has its own airport), which is the capital of the region. Poznan itself has a very good system of trams and buses that also run during the night, so you won't have to worry about having to return to your accommodation before a party even started properly. Even smaller towns in Greater Poland usually have a good bus system, and traveling from one place to the other should also not prove much of a challenge. However, not all towns have a night service like Poznan, so you would do well if you checked the timetables in advance to avoid being stuck somewhere.

Poznan in Greater Poland is the home to Europe's last steam-hauled passenger service that survived up to this day and time. Of course, there are other steam trains in Europe, but they usually only come out for special (often quite expensive) trips, while the steam-hauled passenger service in Greater Poland is exactly what is says: a normal train service for normal people, just with the added charm that is makes you feel like you are traveling back in time when you travel on that train.