Podlaskie - Sights, places, and activities you should not miss

0 Podlaskie Diaspora around the world 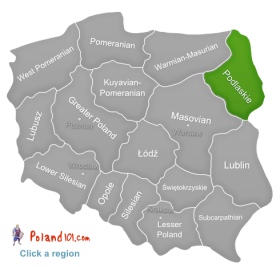 The Podlaskie region of Poland is one of Poland's best kept secrets. Tourists have not discovered this area, and it is quite likely that there won't be any mass tourism there for a long time to come. Podlaskie is sometimes also called the “Wild East”. There are four national parks, three natural parks and plenty of smaller reserves in this stunning part of the country. It is for the people who love nature, and who don't mind taking their time to find their way without the signs that you usually find all over the place in more touristy places. The biggest city in this region has only around 300,000 people living in it, and even though people often thing that the Podlaskie region has not much more to offer than wilderness, you might be surprised about the cultural, historical, and architectural treasures you can find there.

You can fly into the region, so you would have to arrive either in Warsaw, or even in Lithuania (a different country that borders this region) as some destinations in Podlaskie might be closer to Lithuania than Warsaw. Traveling within would be easiest if you had your own car or hired one. Public transport is available, especially in the towns, but can be limited in remote areas (and there are plenty of remote areas in this part of Poland).