0 Silesian Diaspora around the world 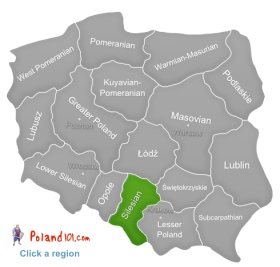 The Silesian region of Poland is one that might not be super interesting for tourists on the first look, but even though it is one of the smallest regions in Poland, and mainly stands out for its urban landscapes, it does have quite a bit to offer. The only real desert in Europe can be found here, and one of the most interesting things to do in Silesia is to visit some of the old mines that have been opened to the public. Some of the mine shafts were transformed into art galleries, and the mines themselves have been transformed into walking trails. This is quite a different kind of walk than the forest hikes people are used to.

The area is not super popular with tourists, which means that the public transport is aimed at the local population. You still should not have many problems with getting around. However, this region of Poland is one of the region in which it would be an advantage to have your own car.

Can't see your surname here? Check for your region of origin here: