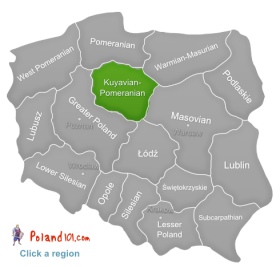 The Kuyavian-Pomeranian region of Poland is special for a few different reasons. First of all, unlike other regions, it does not just have one capital but is ruled by two different cities. The region has been under the influence of Germany as well as Poland in the past, so you will find quite a few things you might expect to find in Germany and not in Poland. The region is ideal for people who love beautiful landscapes, and who would also like to eat well while doing all that walking and exploring. There are also some very good spa hotels in the region. Another point of interest are the many Romanesque churches, Gothic castles, and the reconstructed fortresses and castles that are often the home to medieval re-enactment festivals.

Flying into Kuyavian-Pomeranian is a bit of a challenge as there is only one smallish airport with limited connections. The connections are getting better with time, but your best bet would be to use one of the trains that drive into the region. Getting around within the Kuyavian-Pomeranian region should be reasonably easy. There are buses and trains, but the connections might not be as frequent (especially during night time) as in other regions of Poland. So make sure that you do know your timetables!

If you like ginger bread, then this is the right Polish region for you because the local ginger bread is quite famous. It has been baked with more or less the same recipe for centuries. The Torun ginger breads should definitely be something you try while you are visiting this region of Poland. In general, there is plenty of great baking to be sampled there.