0 Masovian Diaspora around the world 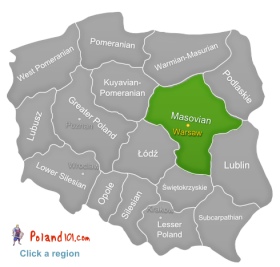 The Masovian region is the home of the country's capital Warsaw, which is the main drawing point for visitors, and will be the main focus of this article. About 5.1 million people live in the region, and around 1.7 million people live in the capital. This region of Poland is the wealthiest region in the country, and attracts national and international visitors alike. Landscape wise, there are forests, but nothing truly exciting as this is one of Poland's flattest regions. If you are looking for hills and mountains, then this is not for you. If you, however, would like to visit one of Europe's most interesting capital city's, then the Masovian region is a great choice for you.

There are plenty of options if you would like to fly to this region: international airlines (also budget) fly to various airports in the region, and you can also use international trains from various European destinations. Once you are in Masovian, getting around is also not much of a problem (unless you travel to very obscure places, but why would you?). The public transport system is very good in Warsaw and around Warsaw. The Masovian region is probably the region of Poland in which traveling is easiest.