0 Lower Silesian Diaspora around the world 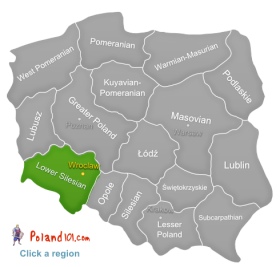 Germany lies to the West of Lower Silesia, and the Czech Republic lies to the South. In the past, this had led to the fact that this part of Poland has seen its fair share of invasions, and in many places in this region, you will also be able to see the lasting marks the other cultures have left (e.g. underground factories that were built by the German Nazis). This area of Poland is very famous for its great festivals, the picturesque landscape with lovely health resorts, and for the beauty of the many castles. If you enjoy a mix of culture and natural beauty, then Lower Silesia will have a lot on offer for you. Lower Silesia is also the most popular area for tourists and one of the wealthiest regions in Poland. The capital of the region is Wrocław.

Getting to Lower Silesia is possible via plane, bus, train, or your own car. The international airport is in Wrocław and a few airlines land there (also some low-cost airlines). As Lower Silesia is a popular area of Poland, it also is not very hard to travel around. In addition to the trains, there is a very good (and quite complex) bus system. If you do not have your own car, then the buses should be able to get you to where you would like to be.

If you happen to go to Lower Silesia during September, then you should make time to take in the International Festival of Oratorio and Cantata Music (Wratislavia Cantans) held in Wrocław. You will be able to hear some fantastic orchestras there, and many famous, international names usually take part in this festival.