0 Lublin Diaspora around the world 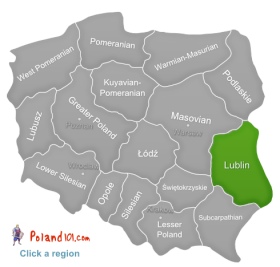 Lublin lies next to the wild Bug river, which is the natural border to Belarus and the Ukraine. In this area of Poland, the visitor can see the many different influences of various cultures and countries that were involved with Poland in the past (either peacefully or violently). The Lublin region has something to offer for lovers of history and architecture, for art lovers, for people who prefer spending time in forests, and also for people who would like to explore underground cave systems.

If you would like to travel into Lublin from outside the country, then you can use the Lublin airport which has good connections to other European countries. It is easy to get from the airport to the city. Once you have arrived in the region, you can make use of a good train and bus system. People who would like to hire a car or arrive with their own car should get a good road map.

When it comes to special things from this regions, then one needs to mention the Arab horses from the Janow Podlaski studs. No other place in Poland has bred Arabs for so long, and on such a scale. The Arabs are sold to customers all over the world. The city of Janow Podlaski is definitely the place for you if you would like to have a holiday that includes horses.