0 Swietokrzyskie Diaspora around the world 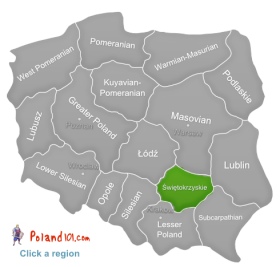 The Swietokrzyskie region of Poland is a region that has something on offer for everyone: from pony riding to sightseeing, from cave exploring to climbing on mountains, from relaxing in a spa to exerting yourself during a challenging hike. The oldest oak tree in the country, the oldest mountains in the country, the ruins of one of the biggest castles.... and the list could go on and on. Even though this region is quite small, it has a lot to offer.

There is no international airport, so you won't be able to fly into Swietokrzyskie, however, there are plenty of bus and train connections. Traveling within Swietokrzyskie is not much of a problem. The area is popular with local and international visitors, so the important places are all reasonably well connected. You would profit from having your own car though if you would like to do some exploring outside the usual tourist places.