0 Pomeranian Diaspora around the world 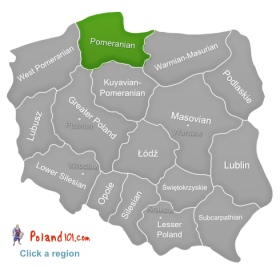 The Pomeranian region of Poland is often subtitled “the playground of Poland” as there is so much to do when it comes to recreation: from some of the best windsurfing, to hiking on impressive dunes, relaxing in a spa, exploring some interesting cities, or just lying down at a beach with a good book, to having fun with the really good night life in some of the hot spots. If you would like to have a varied holiday, then this is the region to choose.

As this area is very popular with national and international holidaymakers, traveling to the Pomeranian region of Poland is very easy. You can fly in or take one of the international trains and buses. Getting around is also not an issue unless you plan on traveling in the northwestern and northern places of the country as those are rather sparsely populated.

Dogs. You have heard of Pomeranian dogs before, right? Those little toy dogs originate from this Polish region. Queen Victoria used to own one of these dogs, and since then, this breed has become rather popular with royalty. Later on, of course, normal people also wanted these dogs to feel more royal maybe? Though if you look at these dogs, you may wonder how they'd truly make you feel.