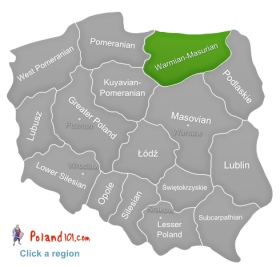 White eagles, black and white storks, lakes that come in different shades of blue and green, lush forests, and a lot of tranquility – if you had to put this region into a few words, then those would be it. The Warmian-Masurian region of Poland is the region of three thousand lakes, literally, because lakes are indeed plentiful in this region, and if you're lucky you might even find a lake that you don't have to share with other people (but don't be too hopeful as more and more people discover this gem of a region). Many of the lakes are connected (via canals), so if you hire a boat (canoe, kayak, or something bigger if you have a license), you can be on the water for hundreds of miles. Another thing the region is famous for are the Teutonic fortifications, of which you could visit some during your stay.

There is no international airport, but you can get to the region by train (be prepared for a long ride though). The best option to get around the area is really to have your own transport. The roads, however, can be nightmare for inexperienced and nervous drivers.