0 Opole Diaspora around the world 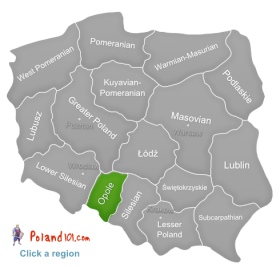 Opole is the smallest region in Poland, and the capital of the region (also called Opole) is also called the capitel of Polish song. While this region might be quite small, it does pack a lot of interesting sightseeing into it. If you like culture, music, festivals, and history, this is a good region of Poland to visit – and you don't have to deal with that many other tourists. There are also some interesting places for people who like hiking, however, if you are after a proper nature and wildlife holiday, there would definitely be more interesting regions than Opole, which is mainly agricultural.

There is no major airport, so if you come from an international destination you would first have to land on a bigger airport, and then take a smaller local plane. You could also take a bus or one of the trains that go into the Opole region. Traveling within the region is not that difficult, considering that the region is also quite compact. There are reasonable bus and train connections between all the places that are of interest to visitors.

The Opole region is famous for two reasons: the Polish song festival in May (visit it if you have the chance, it's a very lively event and a good chance to soak in some Polish culture), and the oldest Dinosaur fossil in the world. The dinosaur Silesaurus opolensis has lived over 230 million years ago, which turned this find into the oldest dinosaur fossil to date.