99,674 DUFFY members around the world 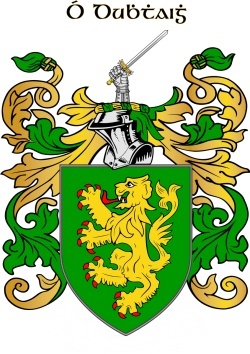 Design your own DUFFY Family Crest

Ó Dubhthaigh- anglicised Duffy, O'Duffy, Duhig, Doohig,earlier O Duhie &c. The root word is 'dubh' or 'black'. According to Woulfe ('Sloinnte Gaedheal is Gall', 1923) et al, Duffy is the form generally used in Ireland (add those who resumed the ''O' in modern times),and Duhig the form often used in Munster.

This surname is doubtless that of several separate families across Ireland, which means that there exists an etymological relationship between the various families, but not necessarily a familial one. The (O) Duffys of Co Monaghan, being the most numerous modern surname of that county, need to be singled out, as do the (O) Duffys of Connacht who have played an important part in the church in that province over the years. Specifically Co Roscommon in Connacht is associated with the Duffys, as is Co Donegal in Ulster.

The 1659 'Census' of Sir William Petty, the English Commonwealth's surveyor in Ireland, is a rather incomplete but nonetheless useful record of Irish families in Ireland during the mid 17th century, immediately after the Cromwellian Invasion. The records for Co Monaghan are particularly disappointing vis-a-vis several prominent Monaghan names, and this is the case with (O) Duffy: there is no entry for this name.

However, as regards Roscommon, the following are found (listed as 'Principal Irish Name'): Duffe, 6 families, Ballintobber Barony; Duffe, 16 families, Athlone Barony. Both Co Mayo and Co Galway are annoyingly missing from the 'Census'. However, 5 families of O Duhy are recorded in Leynie Barony, Co Sligo.

Sir Charles Gavan Duffy (1816-1903) born in Monaghan town, was extraordinarily both a nationalist poet, who was convicted of 'sedition', and knight of the British Empire (knighted in 1873 and made KCMG in 1877). The latter 'honours' stemmed from his status as an Australian politician: he was the 8th Premier of Victoria. His career in his adopted country was groundbreaking in terms of his Catholic background.

Eoin O'Duffy (1892-1941) born in Co Monaghan, was Commandant of the Monaghan Brigade of the IRA in the War of Independence (1920-1921). He was elected as Sinn Féin T.D. for his home county in the elections of 1921. He accepted the Treaty with Britain, signed by Collins and the Irish Delegation on 6th December, 1921; he subsequently fought as a General in the Free State Army during the Civil War that followed the acrimonious split in the IRA. He was made the first Commisioner of the Garda Síochána (Irish police) in 1922. He later became notorious for leading the 1930s fascist type Army Comrades Association or 'Blueshirts', which had a devout Catholic, anti-Communist stance, and taking a group of volunteers over to Spain to fight on the Francoist nationalist side in the Spanish Civil War. The Blueshirts were not very successful in Spain, although this did not deter O'Duffy from approaching Hitler with an offer of forming an Irish Brigade for the Operation Babarossa (Nazi Invasion of Soviet Union in 1941).

Tell us about any famous DUFFY (or surname variant) you think we should add here. We will get our genealogists to check them out and add them to the list. Thanks!

Join the conversation with the DUFFY tribe

I had always heard, that some of the Duffys, who immigrated from Ireland, to America, (and who were Protestant) changed the name and added an "e" to indicate that they were Protestant instead of Catholic. My GGGG Grandad, Michael Duffey, immigrated from Londonderry in the later half of the 1700s, with his friend, Thomas Ramsey and actually fought in the American Revolution. After the war, he settled in Fayette county, PA and eventually migrated to Adams County, OH (via the Ohio River.) My father's name was Denver H. Duffey, born in Springfield, OH (10/01/1920).

You need to remember that most of DUFFYs who immigrated to the United States actually change their name to DUFFEY it was a way to set themselves apart from the Roman Catholics.

My great grandfather John Duffy, married Ellen Brett, and came from Ballaghaderreen, Ireland when it was still part of County Mayo.

Looking for information on Patrick Peter Duffey. Born in 1797 Lived in Stonepark Ireland Married Mary McMahon In 1824 They migrated to the US I’m not exactly certain when. Patrick went by Peter Duffey. He had several children including John Patrick Ellen and Peter. Ellen Duffey married Charles Arthur Lennon in Ireland. The Duffys migrated to Philadelphia Pa. Patrick Peter died in 1853 at the age of 55 any help would be most appreciated Teresa

Yes if you find more information on the John Duffy/ Mary Whitney family history,In Longford Ireland. Please share with me.

James Duffy (great grandfather) was born in Inniskeen (Inishkeen) -- 22 August 1843 to Catherine Cooke and James Duffy. Emigrated to NYC (Manhattan) in 1869. Died there in 1905. He had sisters and brothers -- John, Michael, Catherine (who married Patrick McGeough of Dundalk). She (Catherine Duffy) was born in Inniskeen in 1857 and moved with her husband Patrick to Dundalk, where she died in 1956.

My ancestor is John Duffy who married Mary Whitney. They had James Duffy June 29, 1834 in Co Longford. I would love to make connections to my Irish relatives!!

Areas of Origin for DUFFY

Write an email address and click 'Invite' to share this page with more members of the DUFFY tribe.

Discover where the DUFFY Family members live around the world

Show off the DUFFY Family Crest…