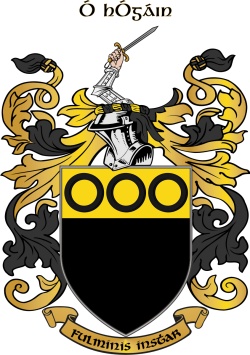 Design your own HOGAN Family Crest

Ó hEochagáin (added by Woulfe, 'Sloinnte Gaedheal is Gall',1923) - anglicised Houghegan, and occasionally Hogan, especially, according to Woulfe in Co Galway. The root is the personal name Eochaid, with the meaning perhaps of 'horse rider'. We can refer to an ancient proto Indo-European root, c.f. 'equus', Latin 'horse'.

The first name mentioned above is, perhaps, the best known as Hogan. The main sept is that of a family who were of the family of Brian Boru, and thus of the Dalcassian tribe (Dál gCais). Their original holdings were north of Nenagh, in northern Tipperary. A Hogan family were also established early in nearby Lower Ormond Barony in the same county. They spread into nearby Co Clare. Another important sept were of the Corca Laoighdhe, whose tribal lands were in south west Cork.

By the time of Sir William Petty's 1659 'Census' the name is recorded as a 'Principal Irish Name' in the following counties:

One may find examples of the northern name O Hagan, for example in Loughinsholin Barony, Co Derry, with 17 families, but this research lies outside the remit of this article, which is strictly covering the form Hogan.

In the mid 19th century, and the appearance of Griffith's 'Primary Valuation' of Irish property, the top counties for Hogan are Tipperary 800, Limerick 228 + 38 city, Clare 219, Cork 145, Kilkenny 142 and Waterford 109. Thus, Hogan is primarily a Munster surname.

By 1890, and the 'Special Report on Surnames...in Ireland' by R.E. Matheson (1894, 1909), which is based on the birth registrations for that year, most Hogan registrations were in counties Tipperary, Dublin, Limerick, Clare and Cork.

Michael 'Galloping' Hogan, the Rapparee, whose daring exploit during the Williamite War (1690) has gone down in legend. Hogan, and his band, controlled much of the territory around the Tipperary/Limerick region. He led the attack on William's Siege Artillery train, camped at Ballyneety, on the night of 11th August 1690. William was already at the gates of Limerick city, and just needed his huge artillery train (153 wagons drawn by 400 horses) to complete the capture of the city. He wasn't to get it. Hogan, with Patrick Sarsfield, the valiant commander-in-chief of the Jacobite forces, at his side, found a way through the Orange lines, at the dead of night. The raiding party consisted of 500 men, who took the Dutch and Danish elite troops by surprise. William's artillery was blown up in a spectacular firework display, which William would no doubt have seen and heard.

Another Munster Hogan, also Michael, was a Limerick man, a fine poet, known locally as 'The Bard of Thomond'. He was born in 1828 in Thomondgate in Limerick city. His great collection of narrative verse on the sufferings and struggles of his country throughout history, was entitled 'The Lays and Legends of Thomond'. One of the best poems therein is the story of a Limerick hellraiser who meets a notorious lady ghost, on Thomond Bridge, as he wends his drunken way home one stormy Christmas Day at about 2 am: 'Drunken Thady and the Bishop's Lady'. MIchael Hogan, who is still undervalued as a poet, particularly by the 'Oxford' glitterati, died in poverty in 1899. A statue of him was erected, next to King John's Castle, and just before Thomond Bridge, in 2005.

'At half-past one the town was silent,
Except a row raised in the Island,
Where Thady - foe to sober thinking -
With comrade boys sat gaily drinking!
A table and a pack of cards
Stood in the midst of four blackguards...'

Tell us about any famous HOGAN (or surname variant) you think we should add here. We will get our genealogists to check them out and add them to the list. Thanks!

Join the conversation with the HOGAN tribe

I'm seeking any information on my GGgrandfather,Garrett Hogan said to have been born somewhere in Ireland around 1799. He left Ireland around 1818 on a ship and finished up in India. He joined the East India Company Army - raising to the rank of Sergeant. He married the widow of a fellow officer, who had 2 children. They went on to have 4 girls and 4 boys together. He never had any further contact with his family - It's claimed his father thought he had run away to Australia? Why Australia in 1818 - it was no more than a penal colony at the time. Maybe there were relatives of his who had already been sent to Australia as Convicts from Ireland. Any thoughts or help would be appreciated.

I am looking for information on the family a John Hogan, born 28 Ap 1836, Abbeyleix, Laois, Ireland

William Griffith Hogan, immigrated to America about 1700. Married Sarah Shadwick Sullivan. Had a son James Shadrack Hogan. He had 6 sons. They went on to fight with Daniel Boone and his scout party. One of the boys married an orphan girl Daniel and wife raised.

Looking for information on Will Hogan's parents, John and Honery Hogan. Will Hogan was born 1750 and baptized at St Catherine's, Dublin City, Dublin, Ireland 3 Jun 1750. I was wondering if he had any siblings and if they traveled to USA (Virginia, North Carolina). My family are trying to complete a family history project started by my late Grandmother. Any information would be appreciated. Thank you.

Hi, I've recently found the story of a certain Michael Hogan, sailor and businessman who traveled to Australia and India before settling down in New-York (USA). He is well known for being the founder of the city of Bombay (N-Y) close to the canadian border Cornwall (ontario). I think that my family could be related to this man and his followers. I know that he was from Co Cork...but there is not much informations available concerning his life in Ireland and what happened to his family after he passed away in New-York city around 1830. His son William was involved in politics in the USA, but I was wondering if other members of this family could have moved to Canada (Upper Canada at this time) around 1850-1860. Hope you can find some informations I don't have! Thanks!

Areas of Origin for HOGAN

Write an email address and click 'Invite' to share this page with more members of the HOGAN tribe.

Discover where the HOGAN Family members live around the world

Show off the HOGAN Family Crest…