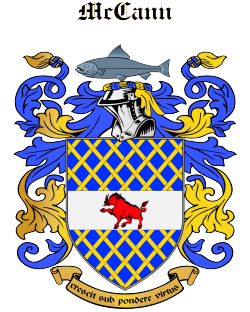 Design your own MCCANN Family Crest

Mac Cana- anglicised M(a)cCann, earlier M'Canna. The root is most probably 'cano' meaning wolf cub, possibly in the sense of young warrior. This is the derivation generally agreed today, and which you may find in MacLysaght's 'Surnames of Ireland', 1985. Howvere, Woulfe in 'Sloinnte Gaedheal is Gall', 1923, gives the derivation as 'son of Annadh', i.e. the root being Annadh.

An early figure is one Cano mac Gartnáin, a king of the 7th century, who held territory in both Scotland and Ireland. The McCanns were lords of Clann Breasail or Clanbrassil, whose territory lay on the south shore of Lough Neagh in modern Co Armagh. An early reference to the sept in the Annals of Ulster in 1155 appears thus: 'Amlaim Mac Canai (steward of Cenel-[O]engusa), tower of the championship and activity of all Cenel Eogain, died'.

The Registrar General's 'Special Report on Surnames...in Ireland' (R.E. Matheson, 1894) , based on the birth figures for 1890, shows most McCann registrations in counties Antrim, Armagh, Dublin and Tyrone. The total number was 175.

Michael Joseph McCann (1824-1883) poet who wrote the stirring poem 'O'Donnell Abu!' originally called 'The Clanconnell War Song' (1843):
'Proudly the note of the trumpet is sounding,
Loudly the war cries arise on the gale.'

Joe McCann (1947-1972) born in Belfast. Official I.R.A. volunteer, immortalised in the famous photograph where he kneels on one knee, rifle in hand, against the background of a burning building. Caught up in the early fighting, where Catholic areas were at the mercy of Loyalist gangs, indifferent and often hostile policing, and British Army intervention, he became an icon of resistance and a hate figure for the authorities. He was gunned down, unarmed, in the street by a team of R.U.C. Special Branch and British Army in April 1972.

My Grandfather was Owen McCann Canal Side Athy County Kildare, My Father Patrick Joseph McCann born 1915 12 children in the family apart from my father the all remained in Ireland my Father came to Luton aged 18.

Looking for the McCann family in Ireland. My great great grandfather was sent to Australia for 7 years for striking a British solder His name was Patrick McCann ! This is how I am here now

What I know and what I think I know. My mother's maiden name was McCann. There were a number of McCanns in and around SW Iowa and I think I have identified them. One John McCann was born in County Mayo Dec 28 or 29, 1824. When 9 years old he removed to England. Why? Don't know! He lived in England until 1853. During that time he married Ella Brennan in Stockport (Greater Manchester) on Sep 23, 1847. They immigrated to America in 1853 living in Philadelphia until 1873 when the family moved to a farm in Harrison County, Iowa. John and Ella had 10 children in those intervening years. Seven survived to adulthood. John died August 7, 1900. Ella passed in 1901. This is where I hit a wall tracking my McCann clan. I like to find John's parents so I can continue building a McCann tree..

My great grandfather was Michael McCann, the father of nine children. Only the youngest was a boy, named Albert McCann. He had one child, a son, Dennis Albert McCann, who also had a son, Dennis Michael McCann, & his second son, Ronald, died shorty after birth. I am Dennis Albert’s daughter, Denise M. McCann. My great great grandfather, Michael McCann, born in County Roscommon Ireland, later lived in Stockton, Ca., & is well-known for having been the first Irishman to become the chief of the Stocton Fire Dept., in the 1800’s. * In reply to Sanders, regarding the McCann’s who lived in the Kentucky area, were descendants of “George Washington McCann”, & there are many records on the southern McCann’s on “Ancestry.com”. (I’d assume that “ir

Does anyone have information about McCanns who moved from Virginia to Kentucky after about 1790? My McCann ancestors lived in Fayette County Kentucky.

I assume that my McCann family moved from Ireland during the Potatoe famine. My great-great Grandfather was Cyrus James King McCann. He lived in Laurel Bloomery, TN and was a teacher. He was married twice and had four kids, 1 son who died and three daughters with the second wife. They moved by wagon train to Grants Pass, Oregon. One of the daughters ran away and the family moved to Monterey, CA at some point in the late 1890s.

Areas of Origin for MCCANN

Write an email address and click 'Invite' to share this page with more members of the MCCANN tribe.

Discover where the MCCANN Family members live around the world

Show off the MCCANN Family Crest…