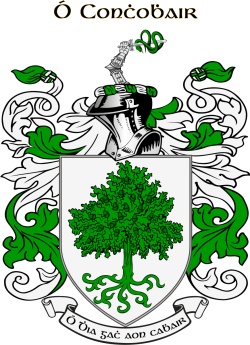 Design your own O'CONNOR Family Crest

Ó Conchobhair- Ó Conchubhair is added by Woulfe in 'Sloinnte Gaedheal is Gall'(1923) and he gives the root as the name Conchobhar meaning 'high will' or 'desire'. The name has been anglicised as O' Connor, Connor, Connors.

MacLysaght in 'Irish Families' (1982) says this is 'perhaps the most illustrious of all Irish surnames'! Just expect some dissent from O' Neills, O' Briens, O' Sullivans, MacCarthys and MacMahons et al.

The name O'Connor has an extraordinary involvement with the vicissitudes of Irish history. However, the surname developed independently in different parts of Ireland, and like O' Neill, is not from one eponymous ancestor.

The most famous O' Connor family is arguably the Connacht family, which divided early on into three branches: O' Connor Donn, O' Connor Ruadh and O' Connor Sligeach, that is, the Brown, the Red and the Sligo O' Connors. These families descend from Conchobhar, the King of Connacht in the 10th century. In fact, Turlogh Ó Conchobhair (1088-1156) and Ruadhrí Ó Conchobhair (1116-1198) were the last High Kings, Ard-Rí, of Ireland before the ravages of the Cambro-Norman, Plantagenet sponsored, invasion beginning in 1171.

Several bearers of the name, particularly O' Conor Don, remained culturally influential, and still Catholic, throughout the period of English domination, and held offices in later times in Ireland, such as Charles Owen O' Conor, President of the Royal Irish Academy, in the latter half of the 19th century. The 'O' Conor Don' is one of the Chieftainships recognised by the Genealogical Office in Dublin.

Quite disparate are the O' Connors of Offaly who claim descent from the legendary 2nd century king of Ireland, Cathaoir Mór. Actually their surname derives from a Conchobhair macFionn, lord of Offaly, who died in 979. Certainly they vie with the Connacht family above for star position, as they were a dauntless enemy of integration into the English world of the colonists of 'the Pale'. They were finally stripped of their power in the reign of the English Catholic Queen, 'Bloody' Mary, every inch as much an imperialist as her Protestant successor, Elizabeth.

The O' Connors of Kerry gave their name to the Barony of Iraghticonor, and lost territory piecemeal, at first to the Cambro-Norman invaders of the 12th/13th centuries, and finally to the Elizabethan conquistadores. Their fastness was at Carrigafoyle.

Then there are the O'Connors of Corcomroe in West Clare. They descend from Conchobhar, lord of Corcomroe, who was killed in 1002. It was at the end of the Elizabethan 'Golden Age' (not particularly 'golden' for Gaelic Ireland) that this family were dispossessed.

Lastly, the O'Connors of Co Derry, lords of the Barony of Keenaght, were usurped, not by foreign invaders, but by the Ó Catháin (O Cahan, O' Kane) in the early Middle Ages.

The 1659 'Census' of Sir William Petty bears witness to their presence as a 'Principal Irish Name'. Taking the Connacht family first:

In the 1659 'Census' there are families scattered throughout Co Offaly, e.g. 19 Conner in Coolistowne Barony, 4 Conner in Ballyaboy, 5 in Geshell & c. Likewise in baronies in Co Leix, such as 7 McConner in Ossery, 10 Conner in Cullenagh, 9 Conner in Portnyhinch, 7 Conner/McConner in Tynahinch & c. This would be the second family mentioned above.

In Co Clare, 24 Mc & O Connor families are recorded in Tulla Barony, Co Clare; 11 McConnor and 13 O Conor found in Inchiquine; and 17 'Connor Mc & O' in the Island Barony; 24 O Connor in Corcomroe; 14 Connor in Moyferta; 5 Connor in the Burren; 11 Connor in Ibrickayne/Enish.

As far as the Derry O' Connors are concerned, there are none in 'Kenaght' Barony in Co Derry, however, in 1659; whereas there are 36 families of O' Cahan! There are 6 families of McConnor in Loghinsholin in that county, and no more to be found.

5 Connor families appear in Ophaley Barony in (west) Kildare, 12 in Clane and 8 in Salt in the same county.

The 1890 births registers show that most O' Connors were born in counties Clare, Kerry, Galway and Cork. It is listed as the 9th most numerous surname in Ireland in 1890, from that record.

Rory O' Connor (1883-1922) a leader of the dissenting republicans post Treaty. Executed in reprisal for the killing of TD Sean Hales, on the orders of Kevin O' Higgins, who had appointed O' Connor to be his best man the year before.

Denis Amar O'Conor Don (1912-2000) Genealogist, born in London; claimant to the High Kingship of Ireland(!). He inherited the designation from his second cousin.

Tell us about any famous O'CONNOR (or surname variant) you think we should add here. We will get our genealogists to check them out and add them to the list. Thanks!

Join the conversation with the O'CONNOR tribe

Areas of Origin for O'CONNOR

Write an email address and click 'Invite' to share this page with more members of the O'CONNOR tribe.

Discover where the O'CONNOR Family members live around the world

Show off the O'CONNOR Family Crest…